“Weather modification is possible by, for example, altering upper atmosphere wind patterns or altering solar absorption patterns by constructing one or more plumes of atmospheric particles which will act as a lens or focusing device.”

Throughout history, mankind has sought to minimize the impact of the unpredictability and severity of violent storms such as tornadoes. To date, solutions have focused early warning and on development of fortified buildings made to withstand the strong forces that are the hallmark of these atmospheric events. Sophisticated prediction methods have been developed to warn populations of potential storm danger. These “warn and seek shelter” mechanisms have clearly reduced the loss of life and, to a lesser extent, property damage associated with these natural events. However, despite our best efforts, loss of life and costly property damage are still strongly associated with severe weather phenomenon. This paper will describe a new concept that may improve computer simulation of these violent weather systems. Using ground-based beams of electromagnetic radiation, ionized plasma patches are created in the atmosphere. These active areas are expected to provide a research tool to understand storm phenomena.

Advanced computer simulations of severe weather systems, such as the ARPS code, require accurate boundary condition information. Data, such as wind profiles as a function of altitude, are an essential input. Hurricane simulations likewise have identified the steering winds as crucial to the development and track of hurricanes. This paper describes a method of creating atmospheric ionized plasma patches. These can be used as implements for rapidly heating well-defined regions of a weather system. Ground based microwave phased arrays, focused on specific locations in the atmosphere, will be used to create the plasma patch and to heat the atmosphere. A roadmap for application of such a capability to weather research and eventually to weather modification will be described. Initial experiments would correlate heating in a specific region of a weather system with computer simulations of the weather system.

Eventual applications include controlled modification of severe storm systems. One such objective is to prevent concentration of storm energy in tornadoes and to diffuse it over a larger area. The anticipated result is minimum impact on overall weather without the death and destruction from tornadoes.

If it does prove possible to prevent tornadoes, then systems are envisioned for intervention in other severe storm phenomena. Hurricanes and typhoons may be modified in some beneficial fashion, and weather modification could be a routine operation in the twenty-first century. This initial approach is focused on research to increase our simulation and understanding of storm dynamics. 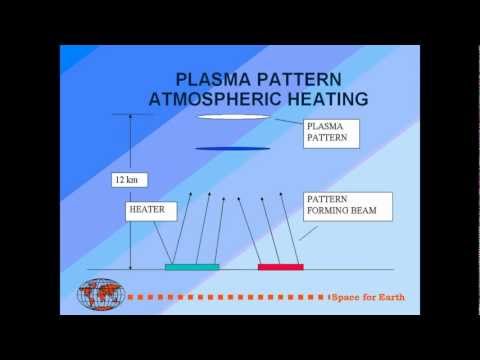 Receive updates on the latest weather modification news in your inbox.

Our solution is an addendum to the international weather warfare ban requiring two things:
• TRANSPARENCY: a worldwide requirement to give 48 hour notice before modifying or experimenting in our sky or surrounding atmosphere.
• VERIFICATION: create a worldwide citizen-powered sensor network to monitor atmospheric conditions, record video footage of sky conditions, analyze rainfall samples, and display atmospheric aerosols in real-time on a publically available website.